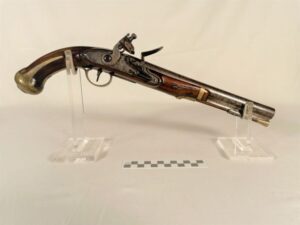 On display at the museum is a recently purchased U.S. Model 1805 flintlock pistol dated 1808, manufactured at the U.S. Armory in Harpers Ferry.

The Harpers Ferry Armory produced more than 600,000 military firearms between 1803 and 1861, when Confederate forces seized the armory’s machinery and supplies and burned many of its buildings.

JCM purchased the pistol at an auction with money from its Fund for the Future. Members of the community and supporters across the country have contributed to the Fund, which makes possible the purchase of important artifacts and documents that would otherwise be unaffordable. 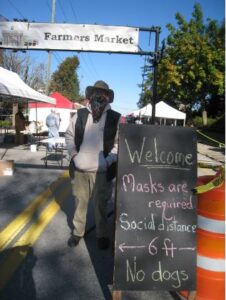 during the pandemic? Please share them with the Jefferson County Museum to document this past year for posterity.

JCM is looking for photographs taken by county residents that illustrate changes in their lives during the pandemic. Photos will be added to our new “COVID-19 Pandemic Collection.” Some will be posted online in an exhibit highlighting the community’s response to the coronavirus.

Share photos, in either color or black and white, showing how COVID-19 has affected your daily life. We welcome images of people wearing masks, socially distancing, working remotely, learning virtually from home, or engaging in other activities to adapt to the pandemic. Photographs need not be professional quality.

Please send digital images electronically to curator@jeffcomuseumwv.org, and for each image explain what’s being photographed, where and when the photo was taken, and the name of the photographer. In addition, we encourage you to include a short story that encapsulates your feelings about the pandemic.

We hope the community will join us in documenting this moment in history for future generations. If you have any questions, please email the curator at the address above. 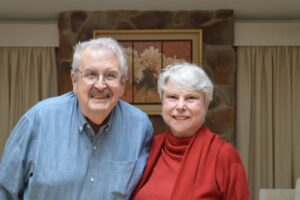 In recognition of their contributions to the museum, the Old Charles Town Library, Inc., Board of Directors has named Patricia Rissler and James Rogers museum benefactors and, in their honor, has placed a plaque inscribed with their names in the gallery.

Over the past 15 years, Rissler and Rogers have donated more than $200,000 to the museum. With their contributions, primarily to our Fund for the Future, we have acquired hundreds of valuable 18th and 19th century documents, conserved important papers and artifacts, and modernized exhibits and outreach to the public. For example, the museum was able to purchase 18th century papers of Battaile Muse, George Washington’s land agent in this area; acquire and conserve artifacts related to African American history; and redesign the museum’s website.

We are grateful for their extraordinary generosity and support of the museum.

We are pleased that the Two Rivers Giving Circle of the Eastern West Virginia Community Foundation has awarded the museum a $1035 grant to support education and research on slavery.

The project is to digitize and reproduce copies of three recently purchased 1859 issues of the abolitionist newspaper, The Liberator. The issues cover John Brown’s opposition to slavery, his attack on Harpers Ferry, and subsequent events. One page will be framed and displayed in the museum along with a narrative explaining the newspaper’s northern perspective on slavery in 1859 in contrast to the prevailing attitude among White people in Jefferson County and southern states.

By digitizing and printing copies of the newspapers, we expect to reduce damage and deterioration to the original documents due to frequent handling, as well as increase the public’s access to the materials through our Online Collection Database.

We are grateful to the Two Rivers Giving Circle and the Eastern West Virginia Community Foundation for supporting this project and in turn, the museum’s strong commitment to inclusiveness and diversity.

Acquisition of Albert Berghaus Sketches and The Liberator Newspapers

The museum recently acquired five important items related to abolitionist John Brown: two sketches by illustrator Albert Berghaus and three editions of The Liberator, a 19th century abolitionist newspaper. The items were purchased at an auction with money from the museum’s Fund for the Future.

On October 16, 1859, abolitionist John Brown led a group of 21 men to Harpers Ferry intent upon inciting a rebellion against slavery. Their first step was to capture the federal armory. However, two days later, that plan was thwarted by the US Marines and Virginia militia. Brown was captured and taken to the Jefferson County Jail in Charles Town. After a trial at the Jefferson County Courthouse, he was found guilty of murder, treason, and inciting a slave insurrection and sentenced to death. Brown was hanged in Charles Town on December 2, 1859.

Albert Berghaus was a sketch artist for Frank Leslie’s Illustrated Newspaper, a weekly publication that provided news and illustrations of significant historical events. The newspaper sent Berghaus to Charles Town in late fall 1859 to capture the aftermath of John Brown’s attempted rebellion. He completed a number of sketches that showed Brown, the jail, the hanging site, and the Virginia militia posted in Charles Town to maintain order. The museum purchased two of Berghaus’s militia sketches.

The sketch on the right shows three groups of Virginia militia standing at night in formation in Charles Town. Berghaus identified them (left to right) as the “Richmond militia,” known as the Richmond Greys; the “Continentals,” Winchester’s Continental Morgan Guard; and the “Frederick Militia,” from Frederick County, Virginia. 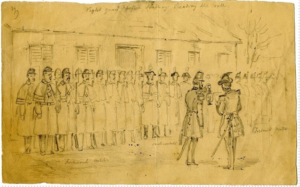 The sketch on the right shows a crowd of spectators and a line of militia “in front of Mr. Hunter’s House,” presumably a reference to a house owned by Andrew Hunter, the Charles Town attorney who prosecuted John Brown. However, Berghaus was mistaken. According to museum historian, Doug Perks, the house sketched appears to be that of Gerard and Margaret Holliday Mason, located across from the Presbyterian Church on East Washington Street. 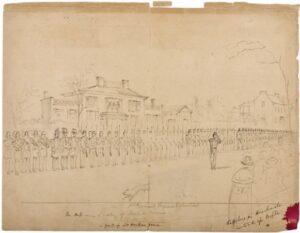 Published in Boston, Massachusetts, The Liberator was the leading antislavery newspaper during the pre-Civil War era. The three 1859 issues purchased by the museum covered abolitionist John Brown’s attack on Harpers Ferry, as well as its aftermath, including his execution.

The October 21 edition contained an article on an inside page, “Attempted Insurrection in Virginia,” giving brief details of events in Harpers Ferry on October 16. By October 23, coverage had expanded dramatically with about half of the four-page paper, including the entire front page, devoted to Brown. Almost all of the December 9 edition, published a week after Brown’s execution, contained news and commentary on his death and martyrdom.

These newspapers provide an important northern perspective on slavery and Brown’s raid—in contrast to the southern White perspective that dominated in Jefferson County and elsewhere in the South in 1859.

The flag and charter of the Green-Copeland American Legion Post 63 have returned to the museum after several months on display at the Smithsonian’s National Museum of African American History and Culture as part of their temporary exhibit, “We Return Fighting: The African American Experience in World War I.”

Edward Tolbert and other Black Jefferson County veterans of World War I formed Post 63 in Charles Town in 1929. At the time, White veterans barred African Americans from their Whites-only post. The new post was named to honor Shields Green and John A. Copeland, Jr., two African Americans who joined John Brown in his attempt to incite a rebellion against slavery by capturing the federal arsenal in Harpers Ferry in 1859.

The family of Edward Tolbert donated the flag and charter to the museum in 2018.

The museum is honored to display the flag and charter to remind present and future generations of the sacrifice, courage, and importance of Jefferson County African American soldiers during and after World War I.

The museum has recently conserved two rare 19th century documents: an 1882 marriage certificate for an African American couple, Alicis Hart and Philips Lucas, from Kearneysville and an 1800 first-edition printed copy of George Washington’s will. Cleveland Conservation of Art on Paper, Inc., repaired, cleaned, and restored the two documents. The Calamara Fund of the Eastern West Virginia Community Foundation paid for the work. 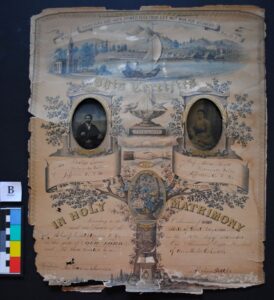 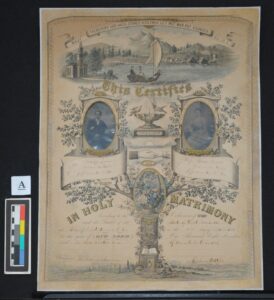 The copy of George Washington’s will is one of fewer than five thought to have survived from the first printing. Cornelia Helbold Haden Brewer, a sixth-generation descendant of Charles Washington, donated the will to the museum after it had been in the family for generations. 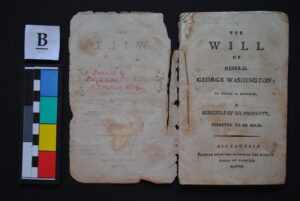 Before conservation:
George Washington will 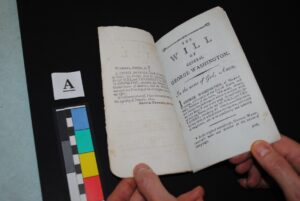 After conservation:
George Washington will