Visit the Jefferson County Museum to discover people and events that helped shape our county’s and nation’s history!

Jefferson County Museum is dedicated to fostering the understanding and appreciation of the county’s history. We are committed to the acquisition, preservation, interpretation, and exhibition of objects that are historically relevant to the county and portray the diverse stories of the people who have lived here. 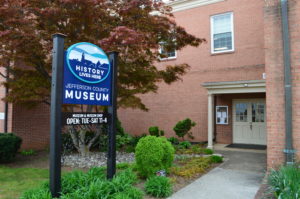 Located in the eastern panhandle of West Virginia, historic Jefferson County is the northern gateway to the lovely Shenandoah Valley. Flowing along the northeastern border is the Potomac River. To the southeast are the ancient Blue Ridge Mountains and the meandering Shenandoah River, which joins the Potomac at Harpers Ferry.

For millennia, Native Americans traversed the Shenandoah Valley engaged in hunting, trading, and warfare. After European colonization until 1863, Jefferson County was part of the Commonwealth of Virginia. In 1863, in the midst of the Civil War, it became the easternmost part of the new state of West Virginia.

Jefferson County’s rich history is a microcosm of the larger historical events that shaped the nation—from George Washington’s surveying here in the mid-1700s to John Brown’s Raid at Harpers Ferry through the Civil War and establishment of Storer College for freed African Americans after the Civil War to the Miners’ Trials in the 1920s.

S.H. Brown map of Jefferson County, 1883,
courtesy of the Library of Congress